Convert your binary code to plain text with our online binary to text converter. Just Paste Binary Value and Hit the convert button, get results.

Simple Steps to Use Binary to Text Conversion Tool

With binary to text conversion tool, you use the binary numbering system of 0 and 1 to represent text or instructions. You also have an option to swap the Text to Binary or Binary to Text online, just the way you want the conversion to show results in. There might include numerous amounts of combinations of 0 and 1 which can easily confuse anyone. To figure that out and convert into easily readable letters or words, binary code to English, binary to text converter can be used.

How to Use our Binary to Text Converter? 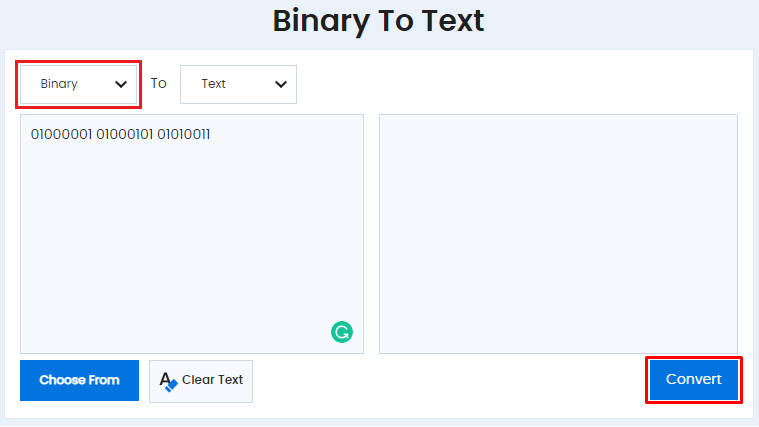 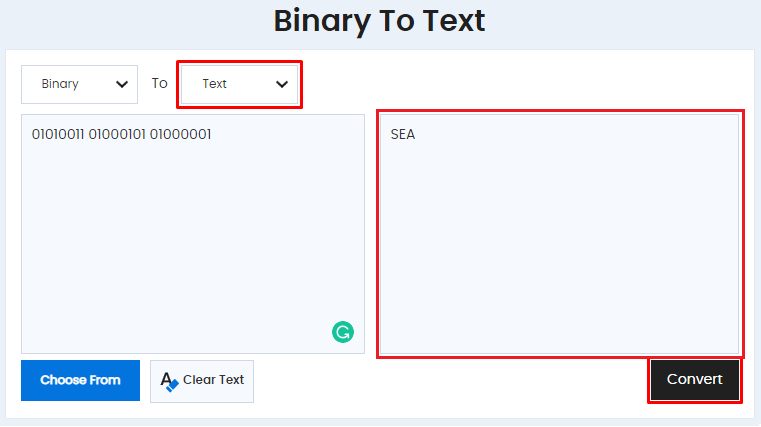 The Reasons Why to Use the Plain Text Converter

Binary code translator, have a number of methods. These below are some problems which are needed to overcome and reasons for encoding plain text. For example:

What is Binary to Text Encoding ?

When starting the web development, the initial and foremost information to learn is solely based on how texts, images and other forms of data are converted into binary code i.e. the computer’s language.

All digital data is encoded in a binary code form where 1 signals a status of on and 0 indicating an off status. The strings that the binary numeral system uses convert the results which are used in mathematics and computer science. The values in the binary systems are typically known as binary numbers.

It is well-known by now that the computer reads the data as on and off, also as low voltage and high voltage. To represent this information, binary data encoding is used to give instructions to the computer. Binary to text conversion is encoding of a digital data in plain text which could be translated as binary to English converter. More precisely, it is a programming of binary data that is formed in such a sequence that the characters are printable.

These encodings are essential when the channel does not allow binary digits to be stored, for transmission of data. The binary value associated with the data encoded is represented in a range from 00 to FF. The numbers 0–9 represent numbers up to nine whereas a-f is represented by the numeric 10–15.

There are 128 distinctive values (0–127) to characterize the alphabetic, numeric, and different punctuation characters used in the English language that the text-encoding set uses that can be translated from Dupli Checker’s binary to text tool. There are also selections of command codes which do not represent the remaining printable characters.

There is also a difference between the encoded binary value for capital and lowercase letters. For example, the capital letter A is represented by the character 01000001 whereas a lowercase alphabet is 01100001. Meanwhile, the numeral 2 is 0110010. The binary encoding system uses seven bits to represent the values of alphabet, numbers, and punctuation digitally.

The DupliChecker.com team comprises of experts in different fields, all with the same primary focus: helping our clients generate greater business by use of online services.